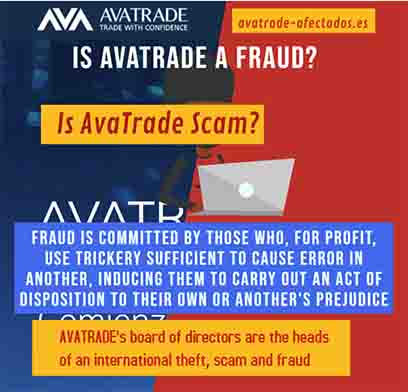 Is AvaTrade a scam?

According to the penal code, is AVATRADE a fraud?

FRAUD IS COMMITTED BY THOSE WHO, WITH A PROFIT MOTIVE, USE TRICKERY SUFFICIENT TO PRODUCE ERROR IN ANOTHER, INDUCING THEM TO CARRY OUT AN ACT OF DISPOSITION TO THEIR OWN OR ANOTHER’S PREJUDICE.

I am Francisco Gómez González, a civil servant of the Kingdom of Spain and in my particular case AVATRADE agents fall within this definition of fraud.

The AVATRADE agent who called herself Melody used fraud several times to induce me to carry out a damage to my own prejudice and to her and AVATRADE’s benefit. She used fraud when:

She told me she was going to open a managed account for me at AVATRADE and opens it for me at Trade99. CLICK HERE to see screenshot.

She promised that the management of AVATRADE would sign the contract with the conditions negotiated over the phone, which were to make a deposit of 40000 euros for 3 months and with a guaranteed return of 100,000 euros. CLICK HERE to see the screenshot of the contract in English.

I ask Melody by WhatsApp if I close the position when the account could still be saved and she answers me with a emphatic NO. CLICK HERE to see the screenshot.

She induced me to make a series of transfers up to 40000 euros to an account that she said she had put me as the owner so that I would have more confidence and so I appear in the transfers that came out of my BBVA account as you can see in THIS SCREENSCAPTURE.

And then when I call the bank where the money had been transferred and ask for my account they tell me that the owner is not me but «Clear Transfer Technologies OÜ» as you can see in the answer that the bank gives me where the transfer went to. CLICK HERE TO SEE THE SCREEN CAPTURE of the bank’s response.

Scam also for directing positions in my AVATRADE account with I have already shown in THIS GRAPHIC which matches the phone calls in THIS SCREEN SCREEN CAPTURE.

Scam when she sends me an email saying that in 5 working days I will have my 40000 thousand euros in my account in Spain and when 16 days pass She cancel the transfer to my account and then they send me a WhatsApp saying that I have lost everything in the stock market being the account with all the positions closed. See SCREEN CAPTURE 1, SCREEN CAPTURE 2 and SCREEN CAPTURE 3.

Deception and scam when the AVATRADE team tells me they cannot identify Melody.

AVATRADE is a fraud because when the agent who has stolen you disappears they give your phone number to other agents and they keep calling every day,.

I keep blocking their numbers which most of them have an Italian prefix and they call with a different number every time.THIS SCREENSHOT belongs to all the numbers I have blocked and most of them start with +39 are the ones used by AVATRADE agents who have scammed me as you can see in THIS FIRST list I made when Melody called me.

Some have changed platforms and if I show them that they are illegal they reply with insults. As can be seen in the following recording:

AvaTrade fraudAVATRADE is a fraud because, as the definition of fraud states, «A FRAUD IS COMMITTED BY ANYONE WHO, WITH A PROFIT-MAKING PURPOSE, USES ENOUGH SCAM TO PRODUCE ERROR IN ANOTHER PERSON, OF THE FRAUD COMMITTED BY THE PARTNERS OR AFFILIATES OF AVATRADE, the company AVATRADE is the one that gets the biggest amount, 70%, as the partners or affiliates only get 30% and some affiliates only 20%. As we can see in THIS SCREENSCAPTURE.

Then the so called AVATRADE advisors working for AVATRADE partners or affiliates have induced me to make transfers to my own prejudice, because in my case Melody told me that the transfers were going to an account opened in my name no. SK37 9952 0000 0010 3152 9753 with BIC/SWIFT TPAYSKBXXXX, which as far as I have been able to investigate with the BIC/SWIFT is an account In the bank: TRUST PAY, A.S. SWIFT code TPAYSKBXXXXXX. Bank address: ZA KASARNOU. City: BRATISLAVA.

Country: Slovakia and when I have investigated further and specifically in my case I was induced to make some transfers totalling 40000 euros but when I called the destination bank the bank (TRUST PAY) they confirmed as I said before that I was not the holder but «Clear Transfer Technologies OÜ», then I will investigate which persons are behind this holder called «Clear Transfer Technologies OÜ». As you can see in THIS SCREEN CAPTURE.

THE CRIME OF FRAUD IS TYPIFIED IN ART. 248 OF THE CRIMINAL CODE.

The definition of the offence of fraud includes the elements: deception, error, act of disposal of capital, damage and profit motive, to which we must add the causal link and other typical requirements of objective imputation.

The definition of the crime of fraud is included in Title XIII, of crimes against wealth and against the socio-economic order, in its Chapter VI «Fraud Section 1ª Fraud arts. 248-251».

FRAUD CARRIED OUT BY COMPUTERISED MEANS

Within the offences of fraud, there are those classified as computer crimes, the classification of the offence of computer fraud, which is committed by means of computerised instruments, is also regulated in Art. 248.2, as follows:

The following are also considered to be perpetrators of the crime of fraud:

a) Those who, for profit and making use of some computer manipulation or similar artifice, achieve a non-consensual transfer of any patrimonial asset to the detriment of another.
b) Whoever manufactures, introduces, possesses or provides computer programmes specifically intended for the commission of the frauds envisaged in the provisions of this Article 248.

Agent Melody used the Anydesk program to break into my computer by cheating.

THE PENALTY FOR THE OFFENCE OF FRAUD

The penalty for the crime of scamming ranges from six months to three years imprisonment.

CHEATING AS A BASIS FOR THE OFFENCE OF FRAUD

Any behaviour can constitute typical fraud as long as it is sufficient and suitable to produce error.

Fraud can be carried out by means of spoken or written language (presenting a false document), through actions (provoking a claim in an insurance fraud) and even gestures (nodding the head, pointing the finger) as long as they lead to an error that determines an act of disposition.

The very abundant case law of the Supreme Court has established the different elements that make up the crime of fraud, as follows:

1) A preceding or concurrent fraud, previously included in one of the schemes or artifices included in the list of the 1973 Code, and today, after Law 8/83 and the 1995 Criminal Code, conceived with a broad criterion, without exemplary statements, taking into account the unlimited variety of cases that real life offers.

2) Said deception must be «sufficient», i.e. sufficient and proportional for the achievement of the proposed ends, having to be of adequate importance so that in social coexistence it acts as an effective stimulus for the transfer of capital, and this suitability must be evaluated both in terms of objective modules and according to the personal conditions of the subject affected and all the circumstances of the specific case.

The fraudulent conduct must have the appearance of sufficient reality and seriousness to deceive people of average perspicacity and diligence. Abstract suitability is complemented by sufficiency in the specific case contemplated.

Fraud that produces error in another

3º) Oxygenation or production of an essential error in the passive subject who is ignorant or with deformed and inexact knowledge of reality, due to the agent’s lying, fabulation or artifice, which leads him to act under a false premise, to issue a manifestation of will based on a corrupt motive, by virtue of which the transfer of capital is produced. AvaTrade hijos de la gran puta.

Act of disposition of the victim’s patrimonial property.

4) Act of disposal of capital, with the consequent and correlative damage for the disposing party, i.e. the damage to the protected legal right, the damage to capital, will be the product of a direct action of the affected party, a consequence of the error experienced and, in short, of the deception, a fundamental act of disposal in the typical structure of the fraud which joins or combines the deceitful activity and the damage caused.

And which must be understood, generically, as any behaviour of the person induced into error, which leads to or directly implies the production of financial damage to himself or to a third party, it not being necessary for the same person to be both the victim and the person who has been cheated.

5) Profit motive, as a subjective element of the offence, explicitly required by Art. 528 of the 1995 Criminal Code, understood as the intention of the offender to obtain a financial advantage correlative to, although not necessarily equivalent to, the damage caused, thus eliminating the incrimination of imprudence.

6) Causal link or causal relationship between the deception provoked and the damage experienced, the latter being offered as a result of the former, which implies that the fraudulent intent of the agent must precede or be concurrent in the fraudulent dynamic, with no criminal assessment being made as far as the type of fraud is concerned, of intent «subsequens», i.e., supervening and not prior to the conclusion of the business in question.

The fraudulent intent characteristic of fraud involves the representation by the active subject, aware of his deceitful scheming, of the consequences of his conduct, i.e., the inducement that encourages the loss of assets as a correlate of the error provoked, and the consequent damage caused to the victim’s assets».